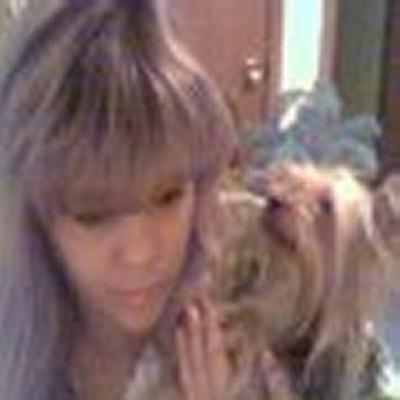 I met my yorkshire terrier Schatzie when he was barely 3 months old.

My husband and I had been married for 5 years and he wanted to get me a lil female yorkie as it had been my dream since a little girl.

I wanted to put bows in her hair and dress her up all the silly stuff true yorkie lovers desire to put their poor 4 legged friends thru.

When we arrived at the breeders there were so many of these adorable lil puppies all together in a pen, but one stood alone from all the rest.

At that moment my desire for a she came my destiny to share my life with a he.

No bigger than my hand we proudly drove him to his new home.As we drove I promised him to be the best friend I could be.

We journeyed every where together Schatzie my husband and I.We worked on the road at that time and so most of Schatzies puppyhood was spent in side of a RV.

He was indeed a character like no other I had ever known.I remember the day he found his growl so serious about what was disturbing him but he was so tiny that all we could do was laugh.

A couple years later I had to leave the road because I became very ill with a brain tumour.

There were days and nights I would hurt and felt so sick from migraines that I wished to no longer breath.

I seemed to be stuck in the biggest pity party. My husband was on the road and at times I would feel so lost and alone.

Then I would hear that lil pitter patter of four tiny paws running down the hall and that scratch at my bedside. Schatzie always knew when I needed him most.

He was always there to lick away my tears or snuggle up close to let me know I wasn’t really alone,and that he truly cared and loved me.He would find some goofy way to make me laugh when all I really wanted to do was cry.

Well by the glory of God and some great doctors I was healed from what ailed me,and blessed to share more life with my best friend.

He grew to be 12 years old when it was his turn to fight what ailed him.WE never figured out exactly what it was we just wrote it off as old age.

It was the hardest thing to see, in just a couple months he went from bossing me around to having no desire to go outside or play with his favorite toys.

He would eat and drink and Doc said that he didn’t think he was in pain, and I prayed every day for Schatzie to be healed.

I was becoming angry because my God and my vet weren’t helping him and there was nothing I could do but watch my best friend deteriorate.

One day I prayed and said God… please if you aren’t going to make him better please just take him.

I felt it was so cruel and I wasn’t ready to let him go.

The next day I got up gave him a bath. He wouldn’t eat for the first time nor had he drank all night.

I changed his bedding put him in it.. Told him I loved him and left for the store.

That was the last moment I shared with my best friend.He waited for me to leave so he could go.

I like to believe he left for a place called the rainbow bridge.It’s the only thing that made me feel better.

That was October 21,2010 and its now March of 2011. I cry as i write this, and some days when things make me remember Schatzie I hurt.

It does get easier once you learn focus on the memories and not the loss.I like to believe that hes up there playing at the rainbow bridge waiting for me.

Today I came to this site after almost 5 months of griefing the loss, I decided to find another friend, and adopted the little girl yorkie that I as a girl, once dreamed of.

I know she can’t replace the one that I never dreamed could mean so much,but I promise to be the best friend I can possibly be.