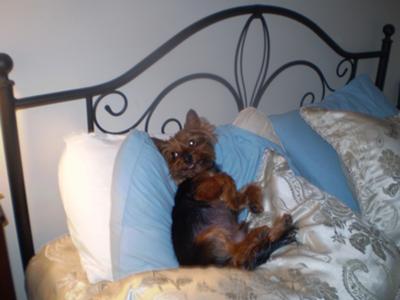 We hope someone can help.

Our 11 year-old Yorkshire Terrier started losing muscle control a couple of months ago.

We took him to the Emergency Vet and they first diagnosed him with “Doggie-Vertigo” and prescribed Dramamine.

Unfortunately, it did not help and he started getting worse.

We followed up with our Vet and they still felt it could be Vertigo; however, they ran more blood tests and said that his liver and kidney levels were slightly elevated.

They said it could be any number of things from a tumor in his liver or brain to liver/kidney disease/failure, but they really hoped it was just vertigo that would eventually go away.

It did not go away, so we decided to take him to another Vet for a 3rd opinion. This Vet said it would be best to repeat the liver/kidney blood tests so we did.

The test results showed the same elevated levels so the Vet said it would be best to have an ultrasound done so that he could determine a method of treatment.

We went back to the original Emergency Vet and had the ultrasound done. The Vet told us that they did not find anything with his liver, but most likely, there were liver shunts and there was no treatment.

She prescribed several different types of medication. She did say; however, that his kidneys are failing and that he will probably only have two to three weeks left before he dies.

However, she said it was very strange that the only sympton he has is the muscle control loss; he should be having severe diarrhea and vomiting.

We asked what his kidney levels were and she said they were only 2.3.

From what I read, that is really not a dire reading.

Has anyone had this problem with their Yorkshire Terrier?

Chewie is like our child and we refuse to be told that he is dying without stronger evidence. We have lost all trust in Vets. Please help. Thank you!